Sheikh Hamdan is the Crown Prince of Dubai. He was born in November 1982. He is married to Sheikha Sheikha bint Saeed bin Thani Al Maktoum since 2019. They have no children. His father is Mohammed bin Rashid Al Maktoum.

The Sheikh is the son of Sheikh Mohammed bin Rashid al Maktoum, the Ruler of Dubai. He is a descendant of the House of Al-Falasi, of which Sheikh Mohammed is the tribal leader.

Hamdan is Chairman of the Dubai executive council and President of Hamdan Bin Mohammed Smart University.

The net worth of the Al Maktoum family is estimated at US$ 5 billion.

Hamdan is very active on social media, such as Facebook and Instagram. He uses the name Fazza or Faz3. He is an active horse rider, diver, and semi-professional skydiver. He frequently publishes photos of himself, for example when skydiving towards the yacht Dubai.

Hamdan is also the owner of the yacht Quattroelle. FAZ3 also owns the 77-meter yacht Smeralda and Quattroelle’s support ship Quattroelle Shadow (which was built as Lady Lola Shadow for Duane Hagadone).

The family owns many yachts including Dubai, Dubawi, and the Silver Yacht Esmeralda. The yacht Dubawi is a converted cruise ship.

Update: The Benetti yacht DXB is owned by Mohammed Obaid Al Zaabi. He is CEO of OBK Investments, based in Dubai. He reportedly lives in a large complex of several palaces, where all his family members live. The area is called Za’abeel, and houses the Zabeel Palace, which was the official residence of Sheikh Rashid, the grandfather of Sheikh Hamdan.

Hamdan reportedly also owns a palace in Abu Dhabi and a desert palace in Dubai. The Crown Prince Hamdan is the owner of the Lurssen yacht Quattroelle. The superyacht was built by Lurrsen in 2013 for Michael Lee Chin. In 2022 Lee Chin’s new yacht AHPO was delivered. 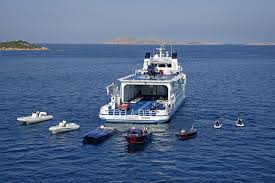