The Sailing Yacht A was built as project 787 ‘White Pearl’. She has been delivered by Nobiskrug to her owner in 2017. She is the world’s largest sailing yacht. Who is her owner? Andrey Melnichenko.

The yacht is powered by MTU enegines. Her cruising speed is 14 knots. The luxury yacht can accommodate 20 guests and has a crew of 20.

The Sailing Yacht is designed by Philippe Starck. Some of her design features are similar to the motor yacht A. Her composite masts are the largest in the world. She is powered by a hybrid diesel-electric package with controllable pitch propellers.

The yacht’s owner is Andrey Melnichenko. He also owns (or owned) the famous Motor Yacht A.

She was delivered to the owner in early May 2017. Delivery was in Monaco by the project team led by Dirk Kloosterman. It was after having completed her final sea trials in the Navantia shipyard in Cartagena. And after final tests and inspections in Gibraltar. See an amazing video of the yacht leaving Germany hereunder.

Gibraltar media report that the yacht was arrested in Gibraltar. This was following a claim of EUR 15.3 million by Nobiskrug. Nobiskrug is reported to have filed a claim for breach of contract. As the final payment of EUR 9.8 million was not paid.

There seemed also a dispute about other invoices, totaling EUR 5,4 million. The yacht was heading for Spain for further work to be carried out.

Update: SuperYachtFan was informed that there was a brief technical incident in Gibraltar over disputed costs in arbitration. Not outstanding payments or unpaid invoices between the company owner of the yacht and the shipyard.

In March 2022 Italian media reported that the yacht was seized by the Guardia Di Finanza (Italian customs) as a result of her owner Melnichenko being put on an EU sanctions list.

We came aware of some technical and legal issues regarding SY A. It seems her designed draught was 8 meters.

Her actual weight was less than her designed weight, causing a draft of 7.5 meters instead of 8 meters. This affected the yacht’s handling. And a portion of the yacht’s bulbous bow (which is intended to sit below the waterline) in fact showed above it. Which was considered unsightly.

It was tried to solve the issue by adding extra weight to the yacht. But a calculation mistake was made, and the yacht was still too light. We were told there is still litigation going on regarding the settlement of the financial damage.

How much is Sailing Yacht A?

Where is Sailing Yacht A?

Who owns the Sailing Yacht A?

How big is the Sailing Yacht A?

How tall are the masts on Sailing Yacht A?

How fast can Sailing Yacht A go? 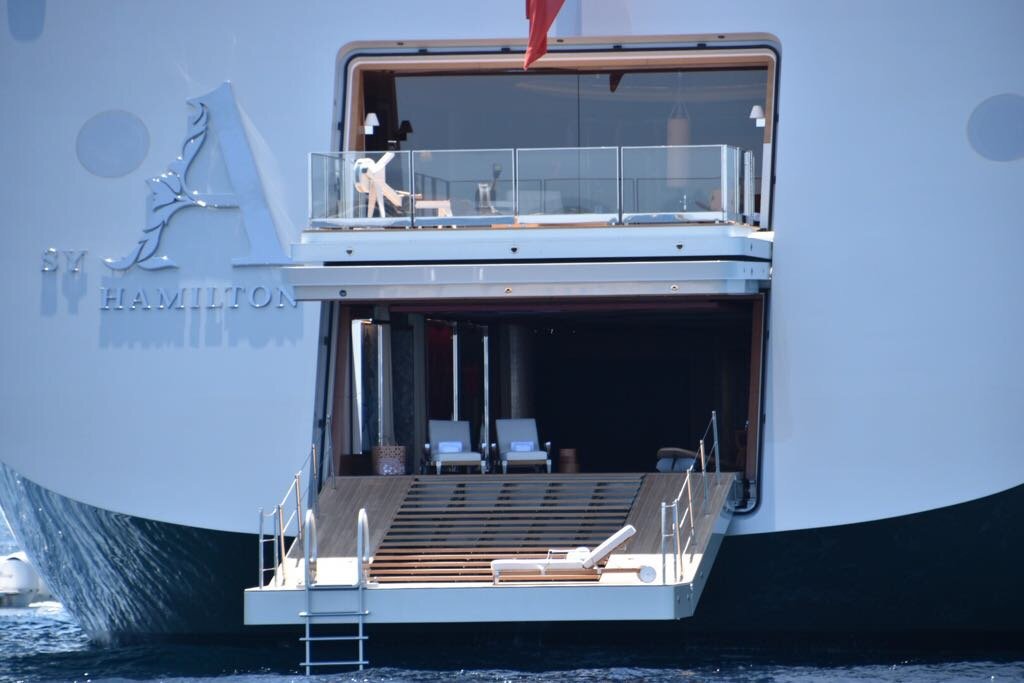 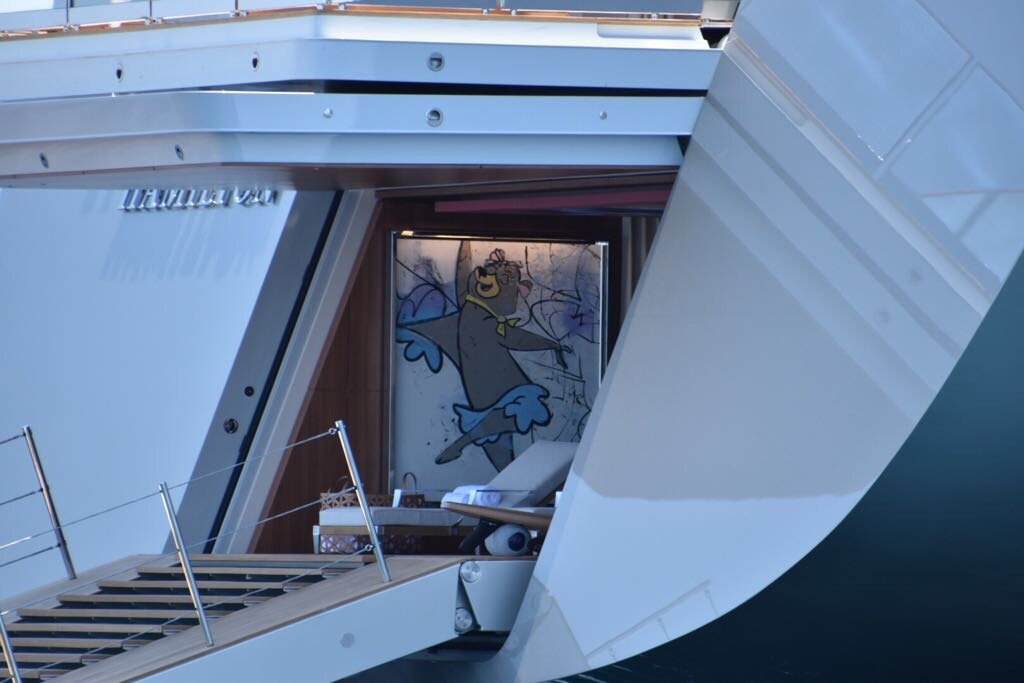 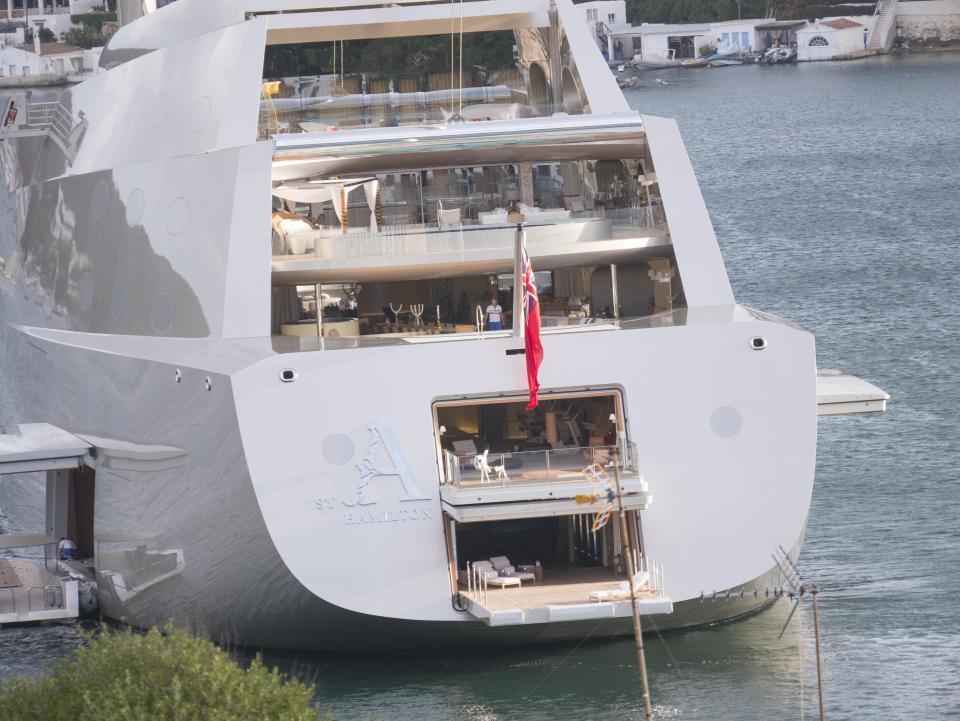 Not much is known about the interior of the sailing yacht. And no official interior photos have been released. But these photos give a glimpse of her interior. Some of the photos above are from Melnichenko’s Motor Yacht A. Her interior is also by the design of Philippe Stark.

She is rumored to have an underwater observation pod. She accommodates 20 guests and a crew of 54.

We now know that the interior of SY A is very different from the interior of MY A. Where MY A has a lot of white, silver and mirrors, SY A has a more traditional and dark interior. There is a lot of dark wood, copper, and warm carpets with lots of patterns. The yacht’s main salon is a two-deck, has several cozy seatings and integrated bookshelves. Oval windows bring some light.

A has some remarkable features: her three masts tower up to 328 feet (100 meters) above the water level. With a crow’s nest at 60 meters. There are 24 shell doors in the hull. Her decks are connected by several elevators. And the sailing yacht will carry a submarine.

SY A has 4 amazing tenders, designed by Philippe Starck. They are built by Lloyd Stevenson Boatbuilders in New Zealand.

Tender 1 is a carbon fiber speedboat was designed for the exclusive use of the owner and his wife. It is a private escape boat without any crew to operate her. Her top speed is an impressive 53 knots.

Tender 2 is a luxury limousine tender for use all year round in both warm and cold climates. The vessel is intended for the transport of guests from the main vessel to shore. Or to other vessels keeping the passengers cocooned in a protected environment away from the elements.

The vessel is operated by 2 crew. She can seat 8 passengers inside the open tub. Her top speed is 35 knots.

Tender 3 is another luxury limousine tender. With panorama windows giving a clear view of the area. She is also operated by 2 crew and can accommodate 8 guests. We estimate her top speed at more than 30 knots.