NEVILLE CRICHTON – Net Worth $ 300 million – Owner of the yacht Como Who is Neville Crichton?

Neville Crichton is an automotive entrepreneur. He owns the  New Zealand based companies Ateco Automotive LTD and European Automotive Imports (EAI). He was born in June 1945. He is married to Nadi Hasandedic. We believe he has children from a previous marriage. But please send us a message if this is incorrect.

Neville Crichton started as a Ford car salesman. He was successful and in 1972 he acquired a used car business in Auckland, which grew to be the largest used car dealer in New Zealand.

He sold the company and moved to Hawaii where he bought a stake in Tony Shelly’s Mazda dealership. This company also grew quickly, adding other brands such as BMW and becoming the world’s largest Mazda dealership.

Later he sold his stake and moved back to New Zealand where he bought all the shares of the stock listed Australian Tractor and Engineering Company, the company now known as ATECO.

Crichton also owns a number of hotels and other properties in Queensland and New South Wales. Crichton was successful in car racing but later moved his attention to sailing.

He founded both Sensation Yachts and Alloy Yachts, but sold his stakes in both yacht builders. He remained a loyal client to Alloy, who built several yachts for him.

His latest yacht, however, was built at the Dutch yacht builder De Vries of Feadship. Next to Como, Crichton owns and has owned several sail yachts named Alfa Romeo.

His net worth is estimated at more than US$ 500 million. We think he owns a private jet. But we have not been able to identify the aircraft.

Crichton and his wife Nadi Hasandedic now live in a US$ 33 million house once owned by Lachlan Murdoch. He is the son of Rupert Murdoch. The house has amazing views, a pool, an elevator, and a car turntable to easy maneuver cars. It is located in Point Piper, Sidney.

Crichton is a serial yacht owner. He is also known to flip yachts (buy them with the intention to sell them again). He currently owns the 50 meter Heesen Como. The yacht was built as Monaco Wolf for Christian Candy. Later she was sold to Isabel Dos Santos, who named the yacht Hayken. More about his current and past yachts hereunder. The superyacht Como was built as Monaco Wolf and was delivered by Heesen Yachts in 2014.

Como is a 50 meter semi-displacement yacht. She is built of aluminum and has a top speed of 23 knots. She is powered by 2 MTU engines.

Her interior design is done by Francesco Paszkowski. She can accommodate 12 guests in 6 staterooms and has a crew of 8.

The luxury yacht was built for Christian Candy, who named her Monaco Wolf, after his twin daughters Isabella Monaco Evanthia and Cayman Charles Wolf.

Christian and his brother previously owned the yacht Candyscape. Candyscape was sold and now named Sealyon.

We were informed that Isabel dos Santos and her husband Sindika Dokolo were the new owners of the yacht.

The yacht was sold (again) to Neville Crichton, who named her Como. The yacht Lady May is a 46-meter semi-displacement yacht, capable of reaching a top speed of 19 knots, with her twin 1,900 hp Caterpillar engines. She was built by Feadship as Como for Crichton.

She is designed by Dubois Naval Architects who focused on maximizing the use of glass.

She has very large windows in the hull and side panel so that the owner’s stateroom gives uninterrupted views. Lady May can accommodate 8 guests in 4 staterooms and has a crew of 8.

Como was sold in May 2015 and renamed Lady May. The owner’s previous motor yacht, an Alloy Yacht also named Como, has also been sold and is now named Polly. 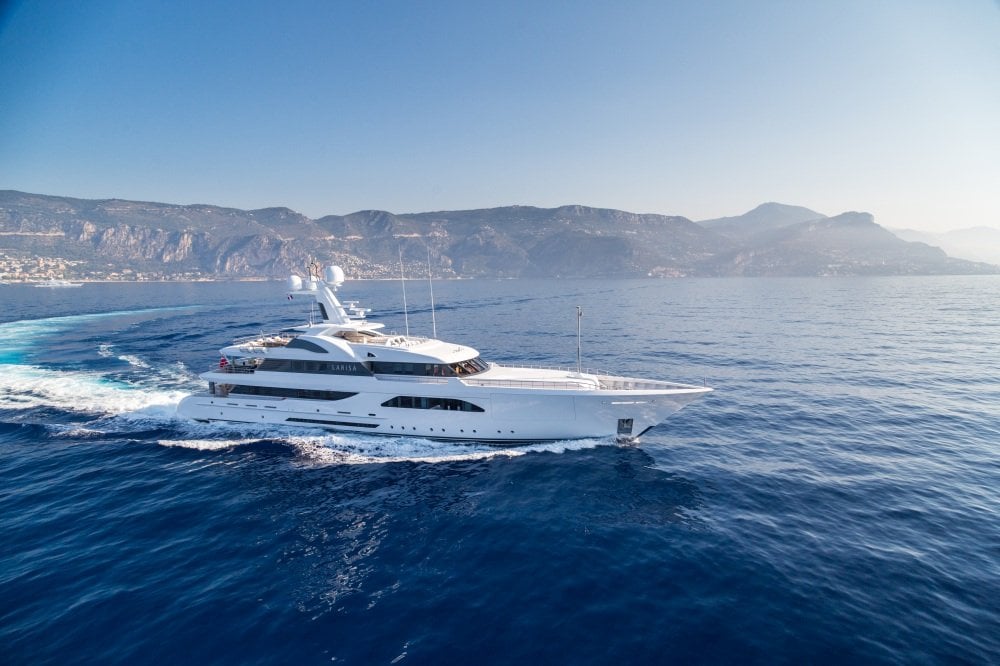 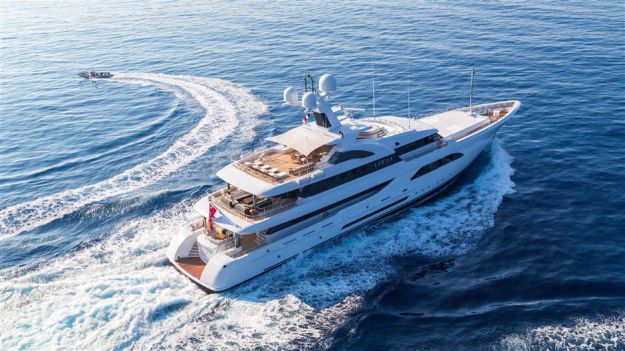 was built in 2013 at Feadship as Larisa. She is designed by De Voogt. While Bannenberg and Rowell Design is responsible for her interior.

Her interior is designed by Bannenberg & Rowell. She can accommodate 8 guests in 4 staterooms and a crew of 12. Her features include a Jacuzzi on the sun deck and a large owners suite with fixed balcony. She has a dedicated tender garage with a lot of watersport toys.

In 2018 she was listed for sale, asking EUR 38 million. In May 2019 she was sold and named Como. But within weeks, she was sold again. Her buyer is David MacNeil, he named the yacht W. Crichton and his wife Nadi Hasandedic live in a US$ 33 million house once owned by Lachlan Murdoch. He is the son of Rupert Murdoch. The house has amazing views, a pool, an elevator, and a car turntable to easy maneuver cars. It is located in Point Piper, Sydney.

We are not sure if he owns a private jet.  Do you have more information? Please do send us a message. These are just sample photos of a Gulfstream G650.