Who is Alisher Usmanov?

Alisher Usmanov is an Uzbek born Russian billionaire and founder of Metallo Invest. He was born in 1953.

Usmanov is married to Irina Viner-Usmanova. They do not have children, although Irinia has a son from her first marriage.

He is a graduate of Moscow State Institute of International Relations. His wealth comes from mining and investments.

He is the majority shareholder of Metalloinvest. Metalloinvest is a leading global iron ore and HBI producer and supplier.

He is also a co-owner of UTH Russia. One of Russia’s fastest-growing commercial television broadcasters. His channels include the Disney Channel, U channel and MUZ-TV channel.

Besides this, he personally owns the Kommersant and Sekret Firmy Publishing Houses. He is a co-owner of Russia’s second-largest mobile telephone operator MegaFon and Mail.ru.

Mail.Ru Group is Russia’s number one Internet company. Mail.RU reaches 85% of Russian users every month. It is the world’s fourth-largest Internet company based on total page views. Is has a global monthly audience of 97.4 million users.

He is the largest investor in Digital Sky Technologies. DST was an early investor in Facebook.

Through DST and Mail.Ru Group investments, Mr. Usmanov holds stakes in some of the world’s leading and most valuable internet assets. Investments include Facebook, Twitter, Groupon, Zynga, Spotify, Zocdoc, Airbnb, Alibaba,  and 360buy.

How much did Usmanov pay for Arsenal FC shares?

He was a major shareholder in London’s Arsenal Football Club active in the premier league. In 2017 he was offered GBP 575 million for the club. Stan Kroenke offered to buy his stake in Arsenal FC.

The Arsenal shareholder is a close friend of Roman Abramovich.

In 2012 the company USM Holdings was formed to bring the assets of Usmanov together under one transparent holding company.

His business partner Farhad Moshiri is the owner of FC Everton. The training ground of Everton is named USM Finch Farm.

How wealthy is Usmanov? He has a net worth of $16 billion. He is one of Russia’s richest men. And he is the world’s 73rd richest person.

The business magnate owns one of the largest private jets.  An Airbus A340 with registration M-IABU. He named his jet Bourkhan, after his father. An A340 has a list price of US$ 200 million. The A340 is registered to Klaret Aviation Ltd.

He also owns a Dassault Falcon 7X with registration LX-USM. The jet is registered to a company named Klaret 7X Ltd. on the Cayman Islands.

Usmanov was sanctioned by the USA, following the invasion of Russia in Ukraine. But according to Busines Insider, the US Treasury later made exemptions to sanctions on Alisher Usmanov. US officials feared that blocking the hundreds of businesses believed to be connected to Usmanov could wreak havoc on the global economy and supply chain. Many assets of Usmanov are legally owned by a ‘Klaret’ company.

The top holding is named Klaret Holdings Limited. According to official documents Alisher Usmanov is controlling shareholding in the Klaret Group.

In February 2020 Usmanov donated a US$ 9 million Manuscript to the Olympic Games Museum. The 14-page manifesto was written in 1892 by International Olympic Committee founder Pierre de Coubertin.

The document is advocating the resurrection of the ancient Greek Games. It is the most expensive piece of sports memorabilia ever sold at auction. Usmanov heads the international fencing federation

He owns many houses around the world. But his main residence is Beechwood House in London. We were told he also owns a property in the United States. But we have not been able to identify the address.

His main house is Beechwood House in Highgate North London. Beechwood House has been owned by King Khalid of Saudi Arabia. And by Khalifa bin Hamad al Thani the Emir of Qatar.

He also owns Sutton Place in Guildford. This is a Grade I listed Tudor manor house built in 1525. The house was once owned by John Paul Getty. In 2007 Usmanov ordered a full restoration of the house. And he added a ‘pool wing’ with a 25-meter indoor pool. 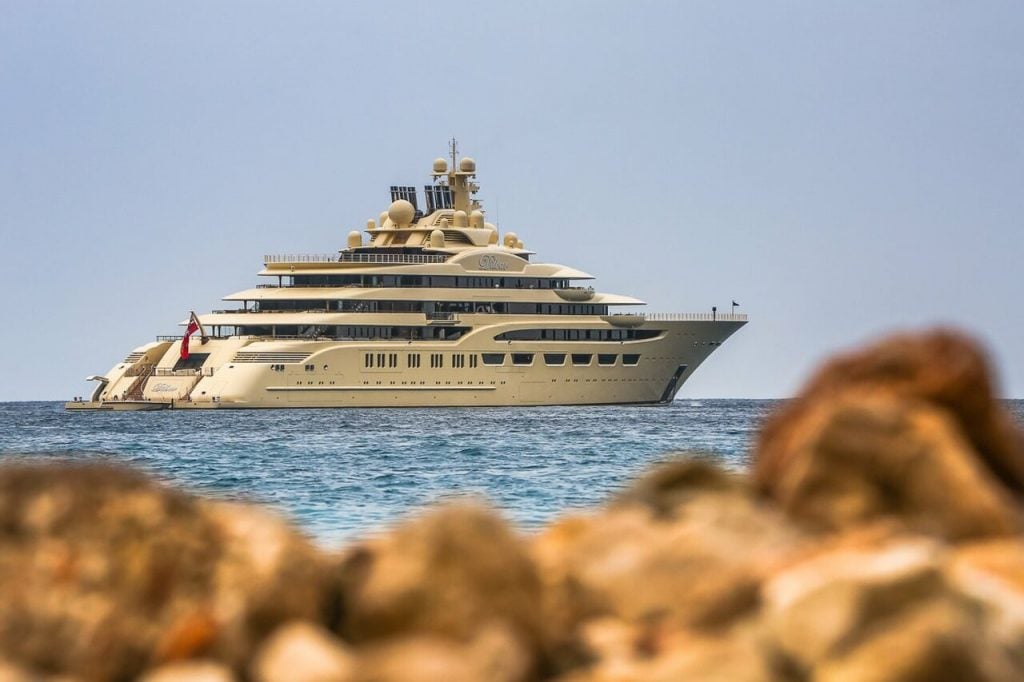 He is the owner of the Lurssen yacht Dilbar, which is one of the largest yachts in the world. For a few years, he also owned the yacht Lady Gulya, named after his sister Gulbakhor Burkhanova. He sold Lady Gulya to Lakshmi Mittal, she is now named Alaiya.

Usmanov owns an Airbus A340 built in 1999 (M-IABU). He named his private jet Bourkhan, after his father.  The jet is managed by Global Jet Luxembourg. Her call sign is Silver Arrows. The aircraft has a value of more than US$ 200 million. She can accommodate more than 40 passengers. Photo by Clement Alloing.  He also owns a Dassault Falcon 7X with registration LX-USM.